This sounds bizarre – am I really trying to say that if you measured the coastline of Britain with perfect accuracy that it would have infinite length? Yes. Yes I am, however counterintuitive that may sound. And funnily enough, the coastline of Britain isn’t some sort of anomaly of nature – shapes like these show up everywhere, from clouds to bark to lightening strikes. They’re called fractals, and are characterised in ‘the broken, wrinkled and uneven shapes of nature’ (in Mandelbrot’s words, who was actually the person to coin the word ‘fractal’), and on a deeper level the characteristic of self-similarity within an object, where smaller part of that object look the larger bits. 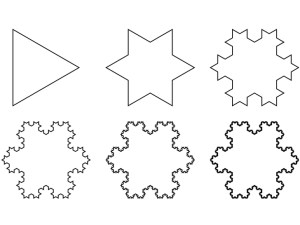 The steps to create the Koch Snowflake fractal, but you’d kept on going infinitely so that no matter how far you zoomed in you get the same patterns. From here.

Fractals are far more representative of the real world than the traditional ideal Euclid forms. They are not perfect in the sense of being smooth and impeccably formed – they are perfect in their complexity, in their pitted and splintered nature. From the minimalist Sierpinski’s gasket, to the (initially apparently simple) infinitely intricate Mandelbrot set, fractals are mesmerising, and oddly familiar. Once you’ve got the concept in your head, you start seeing fractals everywhere, both in the physical world, and in art. Complex subtext in literature doesn’t have a linear relationship, it has a decidedly fractal one. More than one dimension but less than two, fractals have a kind of convoluted cohesion that springs up everywhere in nature, and lends itself equally to both the scientific and artistic eye.

Fractals are everywhere around us – in the sky, in the plants in your garden, even in your food. (Believe it or not, broccoli is fractal – that’s why smaller broccoli florets look like shrunken heads of broccoli!) You’ve probably seen fractals hundreds of times, and maybe even admired their beauty, whether it be appearing in the bark on trees or in clouds in the sky, and learning and understanding the mathematics behind the art just makes it even more mesmerising. Learning the mechanics behind the artistry of the universe does nothing to detract from it’s beauty, as some would like to claim, but simply adds to it. Ignorance, in this case, is most definitely not bliss; knowledge is.

If you’ve enjoyed this blog post, I strongly recommend ‘Introducing Fractals: A Graphic Guide‘, which was one of the first books/comics I read explaining the subject, and was such a great form of media to get into fractals via – it’s definitely a subject in which the use of images helps out! (I also recommend ‘Introducing … : A Graphic Guide’ series in general – they’re very good at explaining a subject in brief without overly simplifying the concept!)

Also, if you’re loving the beauty behind fractals, there are so many mesmerising videos out there which zoom in on the border of the Mandelbrot set which I could watch for hours – here’s one I found quite quickly on Google. I must also give credit to Theo Emms (who’s does theoretical physics with me, and lives in the same halls) for the enlightenment that broccoli is fractal!

This blog post was inspired by the topics I babbled on about in the recording for the fashion video for The Elegant Universe editorial which just came out (and I’m the star of – let’s not forget to mention that!), most of which got cut out in the final video (as I babbled on for over an hour!). If you love the influence of science on art, and vice versa, you should definitely check out the editorial – it’s in V magazine, with so many amazing people who worked on it. Nick Knight shot it, Amanda Harlech styled, Sam McKnight was on the hair, Peter Philips did the make-up, Marian Newman did the nails, and last but not least, Kev Stenning did the 3D scans (yep, there are 3D scans!).